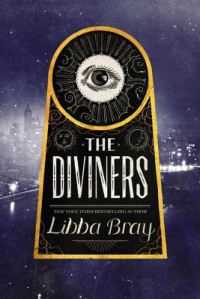 The Diviners has great spooky atmosphere, some fab characters, and a giant hook of a story. Bray goes a little overboard with the 20s slang -- when I read the first few pages, I was happy with how she made the period setting obvious without stating it out loud, but that impression faded quickly -- but I guess for an audience that hasn't heard been exposed to the Roaring Twenties before, it might not be as overdone?

Bray's obviously done her research into the pop culture of that era, and it seems like she tried to cram as much of it into the book as possible. That sounds like a terrible backhanded compliment, but . . . I guess it kind of is, actually! But I still loved the book! I mean, I gave it four stars EVEN WITH the over-peppering of "pos-i-tutely"s and "jake"s and "unc"s.

The main character, Evie, wasn't my favorite, and I didn't fully buy one side of the obligatory romantic triangle, but that didn't lessen my enjoyment of the book as a whole (and it is a whole lot of book, clocking in at almost 600 pages). And there's a lot of promise with all the "supernatural skillz" stuff, but it wasn't explored as much as I'd like in The Diviners -- I guess because Bray is trying to pace herself since it's meant to be a series.

But as much as I felt ambivalent about Evie, there were several characters that I LOVED, and I totally got caught up in the story, and even with the overdose of slang I was way into the setting, which doesn't seem like a common one in current YA. At least, I haven't run into it lately. Much better than yet another cardboard high-school-hallway scene.

So yeah, creepy and compelling and yet another series to follow. 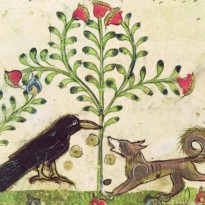